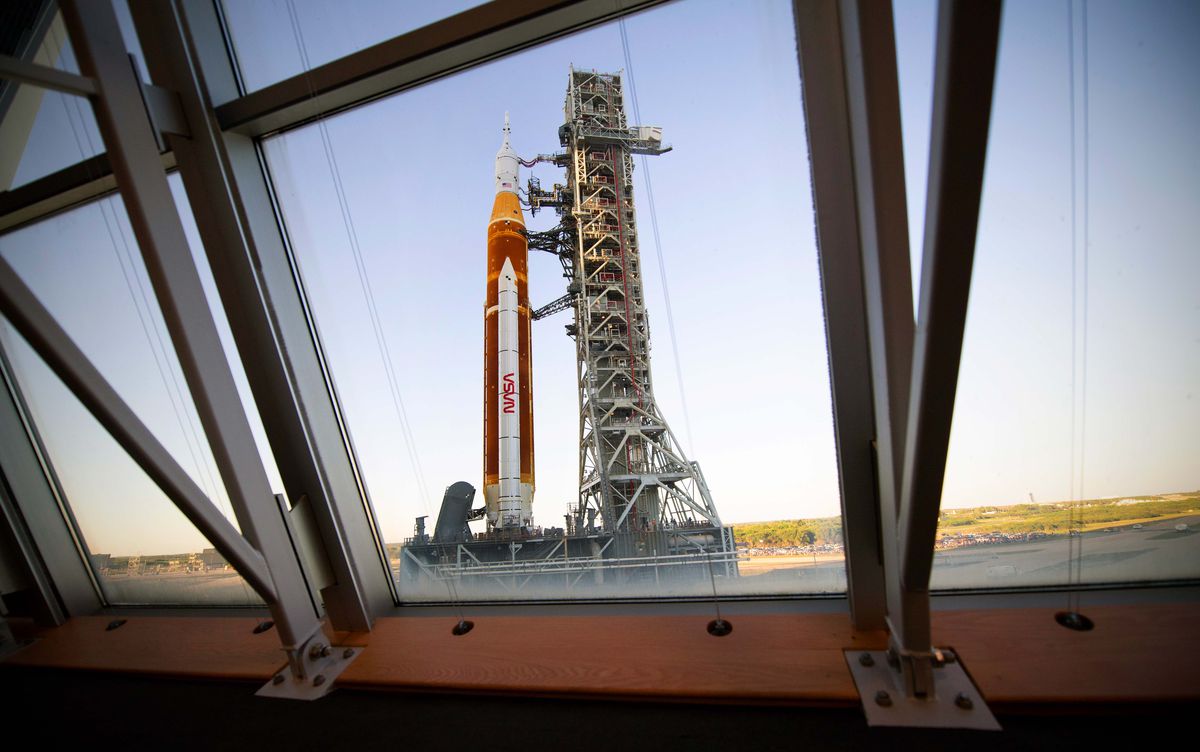 Artemis I, NASA’s new mission to the moon, explained


A new NASA rocket is about to take off on a historic mission to the moon. The Artemis I mission won’t land on the lunar surface, but the trip itself will be the farthest a vehicle designed for human astronauts has ever traveled into space.

There won’t be any humans on NASA’s big trip, but there will be three astronauts: Helga, Zohar, and Moonikin Campos. They’re high-tech manikins — that’s the term for human models used in scientific research — filled with sensors that will test how the human body responds to space travel. Helga and Zohar are designed to measure the effects of radiation on women’s bodies in space, and Moonikin Campos will sit in the commander’s seat to track just how bumpy a voyage to the moon might be for future human crew members. While these manikins might not look particularly impressive on their own, they will play a critical role in NASA’s ambitions to build a new pathway to the moon and, eventually, send astronauts to Mars. They’re also just one of several science experiments aboard the mission meant to better our understanding of space travel.

Liftoff was originally scheduled for Monday morning, but NASA postponed the launch after engineers encountered several issues, including a nearby thunderstorm and problems with chilling one of the rocket’s engines. NASA now plans to launch Artemis on Saturday afternoon, sometime between 2:17 pm and 4:17 pm.

As soon as NASA does figure out fixes, the Space Launch System (SLS), the most powerful rocket NASA has ever built, will lift off, carrying the Orion spacecraft on its nose. Once the vehicle leaves orbit, Orion will travel past the moon, and then thousands of miles beyond it, before turning around and heading back to Earth — a 1.3 million-mile journey that will last 42 days. You can watch the launch here, starting Saturday.

“This is a good demonstration that the rocket works the way it’s supposed to,” Wendy Whitman Cobb, a professor at the US Air Force’s School of Advanced Air and Space Studies, told Recode. “It will give NASA a little bit more confidence for crewed missions coming up in the next couple of years.”

Artemis is the next generation of moon missions. It’s part of NASA’s broader ambitions for lunar exploration, which include astronaut treks across the moon’s surface, a lunar human habitat, and a new space station called Gateway. Artemis I also sets the groundwork for the next two missions in the Artemis program: Artemis 2 is scheduled to send humans on a similar trip around the moon in 2024, and Artemis 3 will make history by landing the first woman and the first person of color on the lunar surface sometime in 2025, at the earliest. All of the research happening on Artemis I — including Helga, Zohar, and Moonikin Campos — is meant to prepare for those later missions.

NASA’s ride to the moon, the SLS, was designed to carry an extremely heavy payload. The rocket is just a few meters taller than the Statue of Liberty, and it can generate 8.8 million pounds of thrust. Like other launch systems, the SLS is made up of several different stages, each of which plays a role in overcoming Earth’s gravity, breaking through the atmosphere, and reaching outer space. To make that happen, the SLS includes twin solid rocket boosters, as well as a 212-foot tall core stage filled with more than 700,000 gallons of liquid oxygen and liquid hydrogen. It’s the largest core stage NASA has ever made.

After takeoff, the boosters will fire for about 2 minutes before separating from the vehicle, falling back toward the ground, and landing in the Atlantic Ocean. Eight minutes in, the core stage will do the same. At that point, the Interim Cryogenic Propulsion Stage (ICPS) will take over and circle the Earth once. About 90 minutes into the flight, the ICPS will give Orion the “big push” it needs to start flying in the direction of the moon, and then fall away.

While technically new, the SLS is based on older technology. Several of its components, including its main engines, are either from or based on systems used by the NASA Space Shuttle program, which ended in 2011. And while other space launches have started using reusable, or at least partially reusable, rocket boosters, the SLS will only fly once. This differentiates SLS from Starship, the super-heavy launch vehicle that SpaceX is designing for moon missions. SpaceX, which beat out Blue Origin for a $2.9 billion contract to build NASA’s lunar landing system, expects Starship’s first orbital test flight to take place sometime in the next six months. Congress’s decision to fund SLS is an ongoing sore spot within the space industry because the project went billions over budget and was delayed several times, and because private companies are now developing less expensive alternatives.

“Congress has put up with the over-budget, behind schedule, because SLS has kept the money and jobs flowing to key congressional districts,” explains Whitman Cobb.

There is broad-based support for Orion, which NASA designed specifically for Artemis missions, as well as potential trips to nearby asteroids or Mars. The spacecraft was built by Lockheed Martin and, from the outside, it looks like a giant turkey baster with wing-like panels coming out from its side. Orion is home to the Artemis crew module, which is where astronauts jettisoning to and from the moon will eventually spend their time. Once the spacecraft is vetted for human astronauts, the crew module is expected to offer various space travel amenities, including sleeping bags, an assortment of new NASA-recipe space food bars, and a revamped space toilet that’s designed for zero gravity and people of all genders.

On this mission, the primary passengers will be a collection of science experiments. One test involves the NASA manikins Zohar and Helga, which are made of 38 slices of plastic that are meant to imitate human tissue, as well as more than 5,600 sensors and 34 radiation detectors. There’s a high level of radiation in space, which is a source of ongoing concern that future astronauts could face heightened cancer risk, especially as space trips become longer and more ambitious. Both of these manikins were designed with breasts and uteri because women tend to be more sensitive to radiation. Zohar will also wear a specialized protective vest called AstroRed, which engineers are evaluating as a potential way to protect astronauts from radiation, including during solar flares. Helga won’t receive a vest, and will allow NASA to study how much the AstroRed actually helped.

Orion is also carrying an experiment that’s meant to test how yeast responds to radiation. Researchers plan to store freeze-dried yeast underneath one of the Orion crew seats, and then expose the yeast to fluid over the course of three days in space. Once Orion lands back on Earth, scientists will analyze the yeast’s DNA to study how it fared. The experiment could yield insight into how humans might stay healthy in space during future trips.

A version of Amazon’s Alexa voice assistant is hitching a ride, too. NASA is testing Callisto, a combination of customized hardware and software that Amazon, Cisco, and Lockheed Martin designed to communicate with astronauts. The test will enable mission control to send audio and video messages to a tablet aboard the Orion capsule, where a version of Alexa will receive the message and share a response. While the tech might sound a little like HAL from 2001: A Space Odyssey, the engineers say the system is meant to provide assistance and companionship.

“Callisto is a standalone payload onboard the Orion spacecraft, and it does not have any control over flight control or other mission-critical systems,” says Justin Nikolaus, a lead Alexa experience designer at Amazon.

Other aspects of Artemis I’s payload are more sentimental. A plush doll version of the Shaun the Sheep character from the Wallace and Gromit franchise will travel on Orion. So will a Snoopy doll outfitted in an astronaut costume, along with a pen nib that Charles M. Schultz used to draw the Peanuts series, wrapped in a comic strip. Mementos from the Apollo 11 mission, which landed the first humans on the lunar surface in the 1960s, are also going, including a tiny sample of moon dust and a piece of an engine.

Some of Artemis I’s most important research projects won’t be returning to Earth. The mission includes plans to launch 10 miniature satellites, called CubeSats, into the moon’s orbit. These satellites will collect data that NASA, along with private companies, could eventually use to navigate on and around the moon.

One satellite, LunIR, will study the safety of the lunar surface with infrared imaging, producing information that could influence where astronauts will eventually travel. One satellite, called the Lunar IceCube, will attempt to detect lunar sources of water, which NASA could eventually use as a resource. Another satellite, NEA Scout, will head to a small, nearby asteroid, a side trip that could inform future crewed missions to other asteroids. The satellites will be launched by another component, called the Orion Stage Adapter, only after the spacecraft is a safe distance away.

These satellites are a reminder that NASA is interested in far more than just visiting the moon. The Artemis program is laying the groundwork for an unprecedented level of activity on the lunar surface, including a human base camp, a series of nuclear reactors, and a mineral mining operation. NASA has expressly said that it wants to develop a lunar economy, and the space agency has also established the Artemis Accords, a set of principles for exploring the moon that more than 20 countries have now joined.

Eventually, NASA plans to turn the moon into a pit stop on a much more ambitious journey: a human mission to Mars. Right now, it seems like that could happen sometime in the late 2030s. But while many of these plans are still far out, it’s clear that the Artemis program is far more than a repeat of the Apollo program.

“Apollo was a political act in the context of the Cold War to demonstrate US national power to the world. It was explicitly a race with the Soviet Union to be first to the moon. Once we were first to the moon, the reason for continuing went away,” explains John Logsdon, the founder of the Space Policy Institute at George Washington University. “Artemis is intended as the first program in a long-term program of human exploration.”

Of course, all of this hinges on the Artemis I mission running smoothly. NASA still needs to evaluate how well SLS and Orion work together during liftoff. The space agency also needs to study how well Orion survives its descent through the atmosphere, which we won’t know for quite some time. If all goes well, the Orion capsule, along with its motley payload of science experiments and galactic tchotchkes, will return to Earth and splash down in the Pacific Ocean more than a month from now.

Update, August 31, 2022, 11:20 am ET: This story was originally published on August 27. It has been updated with details about NASA rescheduling the Artemis 1 launch, and more information about the Callisto payload.