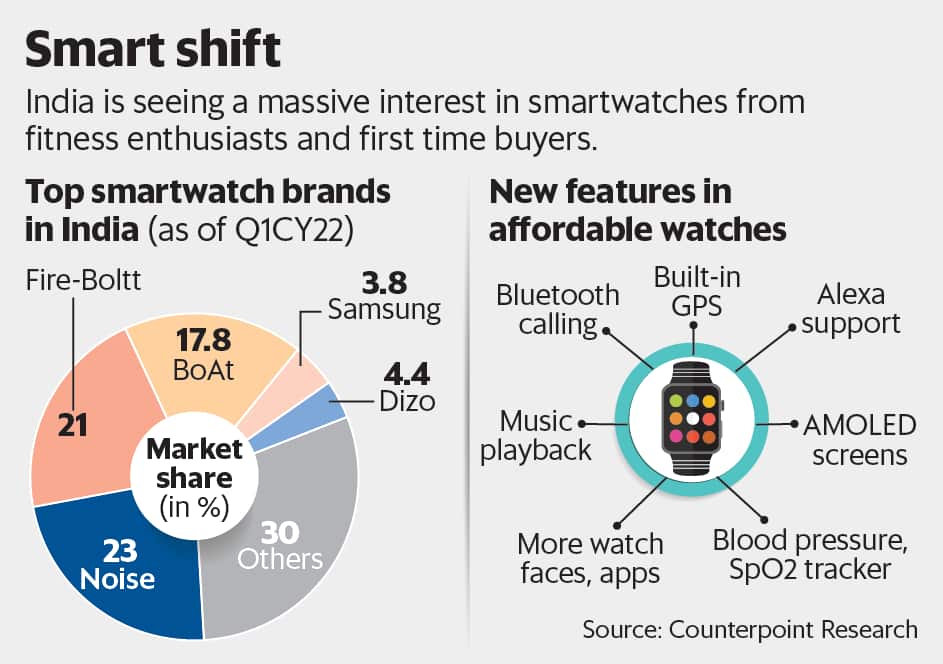 Sinha is one among a growing number of users who prefer a budget wearable device. However, manufacturers realize the need to innovate and add more features even to the budget devices such as smartwatches and headsets.

For instance, last year, boAt parent Imagine Marketing Pvt. Ltd collaborated with American audio tech firm Dolby Laboratories to expand its portfolio of gaming headsets using Dolby Atmos. It has also used the technology of audio optimization firm Dirac for its products and Amazon’s Alexa for its smartwatches. It offers a universal user interface (UI) across its smartwatch lineup.

Faisal Kawoosa, chief analyst and founder, techARC said most Indian brands have a lot of catching up to do in terms of software and UI. “What most offer is neither open sourced, nor proprietary. However, that is the beauty of it and also the reason why we have seen so much growth in this segment.”

Kawoosa wasn’t surprised to see Indian brands upping the ante. “The only differentiator for most Indian watch brands is affordability, which is why they are trying to bring fully loaded options at an affordable price.” However, he said, closed source software may not work for Indian brands, unless they build an ecosystem and provide incentives for developers to build apps for them.

Sameer Mehta, co-founder and chief product officer of boAt, said many features in today’s smartwatches weren’t previously available. “Features like SPO2 are widely available now. Smartwatches with bluetooth calling have become more affordable. Even in manufacturing, many new chipset manufacturers are offering better battery and performance than before,” he said.

While users often expressed concerns over the viability of such products for monitoring health, Vishal Gondal, founder and chief executive officer of GOQii, said Vital was approved by the Central Drugs Standard Control Organisation (CDSCO) as a Class-B medical device. Gondal said that data from the Vital is “acceptable for clinical needs”.

Growth in wearables in India and the entry of smartphone manufacturers such as OnePlus and Realme with resources and software expertise have prompted local brands to step up. In a May report, International Data Corp. (IDC), said that smartwatches were the fastest-growing category with 173% growth in the first quarter of 2022 from the year-ago.

“The triple-digit growth is just the beginning,” said Aayushi Kishore, co-founder, Fire Boltt, a homegrown wearable manufacturer, which is working on improving user experience by offering high-end and relevant features.The company is applying for several patents, including a proprietary operating system (OS), Kishore said. “Most focus is on hardware. We are working to ensure our software is optimized in terms of battery consumption and firmware stability,” she added.