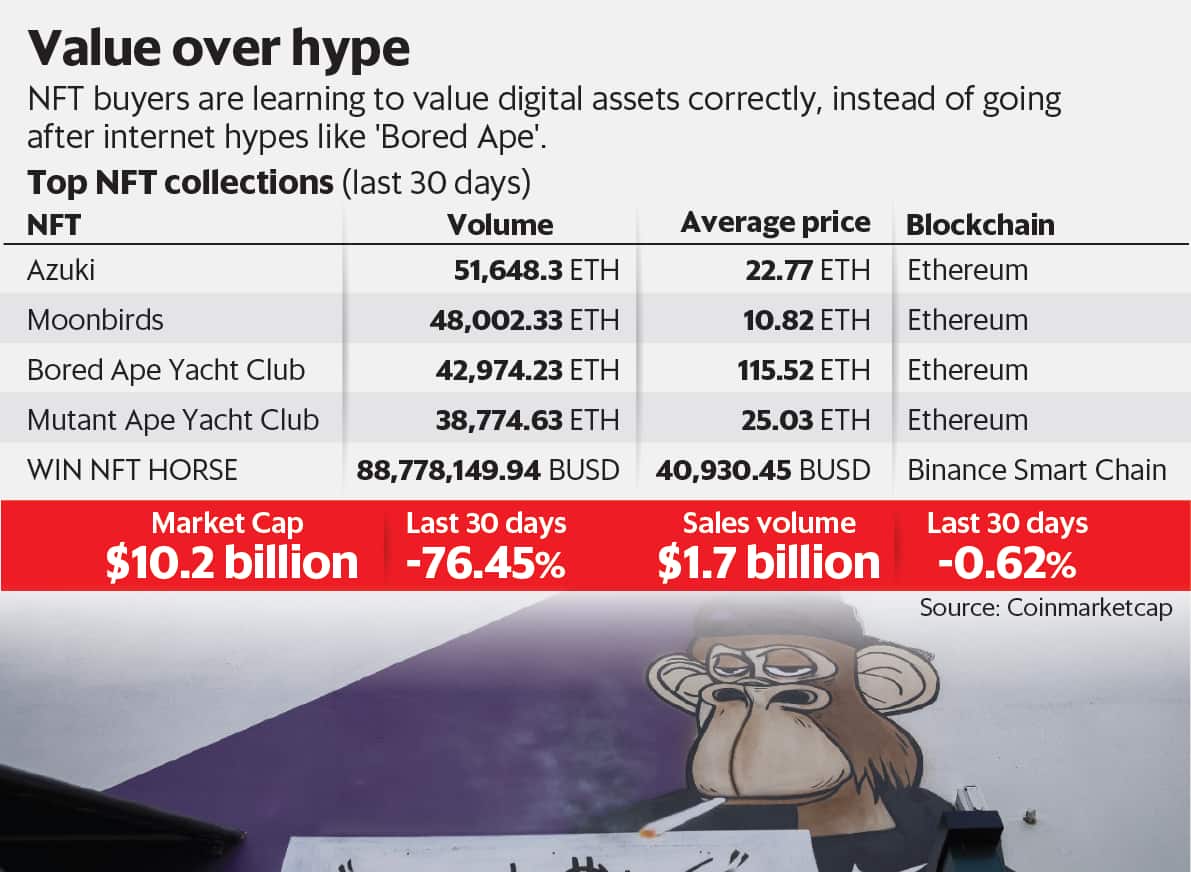 On 13 April, an auction for an NFT of the first tweet ever, which was sold for $2.9 million by Twitter co-founder Jack Dorsey in March last year, garnered just $277 as its highest bid—a massive drop from its original price.

This, according to experts, is a sign that NFT buyers are increasingly learning to value these digital assets correctly, instead of simply going after internet hype.

“Most NFT creators fall for the hype without understanding how to create value,” said Sidharth Sogani, founder and chief executive of CREBACO, a crypto analysis firm. “They are too focused on the price,” he added.

“There have been more than 6,000 NFT projects. There have been so many NFT offerings and people have invested large amounts, but they have managed to sell less than 10-15% of generic NFTs. They just flip it to increase prices,” he noted.

Sogani isn’t the only one to spot this trend. Tosehndra Sharma, founder and chief executive officer of NFTically, which offers software-as-a-service for businesses to set up their own NFT marketplaces, said the “real value is showing in the market” now.

According to blockchain analysis firm Chainalysis, 110 NFT wash traders collectively made nearly $8.9 million in profits last year. Such activities will be difficult as the market learns to recognize true value. Chainalysis defines “wash trading” as a transaction where the seller is present on both sides of the trade in an attempt to create a misleading picture of an asset’s value and liquidity.

“The hype period is gone. Going forward, no investment will happen based on hype,” Sharma said, noting that investments in NFT startups will also reduce consequently.

The hype around NFTs has helped startups raise millions in funds. According to investment tracking firm Venture Intelligence, VCs invested $520 million in Web3 startups in 31 deals in 2021. In 2022, they have already invested $522 million in 20 deals so far.

Though the jury is still out on the number of NFT owners in India, it is believed to be growing, given the large user base of cryptos in the country and the hype generated by cricket and Bollywood NFTs. For instance, last November, the auction of an NFT collection of veteran Bollywood actor Amitabh Bachchan’s father’s poems and movie posters fetched $9,66,000 (approx ₹73 crore).

To be sure, startups are aware of this change in the market, too. For instance, large firms such as MakeMyTrip and MG Motor India sold NFTs over the past four months using fiat currencies instead of cryptocurrencies. They did so using a platform called nGageN created by homegrown blockchain firm KoineArth.

Alternatively, crypto exchange WazirX’s NFT marketplace started allowing creators to post collections instead of singular NFTs, since March. The company calls these “nano-NFTs” and the idea is to allow creators to build a community around their artworks, music, etc., instead of selling one NFT at a time.

Sandesh B. Suvarna, vice president, WazirX NFT Marketplace, noted that globally NFT 10K projects such as Cryptopunks and Bored Ape Yacht Club (BAYC) have been the most successful, but such projects usually require creators to spend on creating their own infrastructure, and the nano-NFT initiative hopes to provide that infrastructure to creators.

The so-called 10K projects are those where the creators launch a whole host of NFTs and build a community around them. Such projects have been able to partner with brands for NFT-related marketing activities too such as BAYC’s partnership with footwear brand Adidas last year. BAYC and Cryptopunks, both of which consist of a line of digital avatars, rank among the most valuable NFT projects globally, according to data from blockchain tracking firm DappRadar. Not everyone is convinced that the market is changing. Prashant Garg, partner and technology consultant at EY, said it might be too early to call this a trend just yet.

“What has happened here is that the perceived value of an NFT hasn’t turned out to be true. What this may do is that NFT enthusiasts will be cautious as they invest in assets of low utility and perceived value such as cool cat or BAYC,” added Garg.

With inputs from Prasid Banerjee.