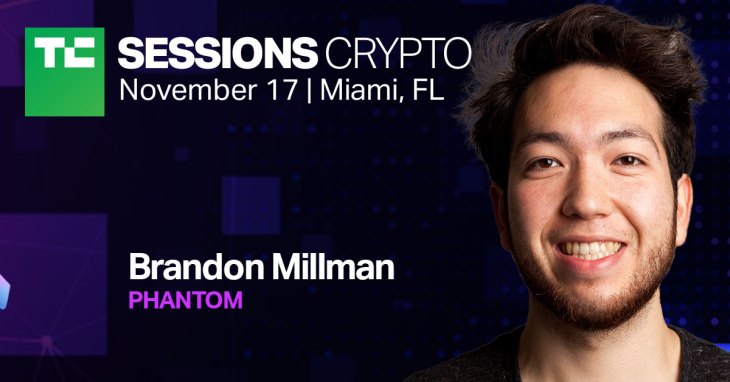 VC firms love growth, and despite predictions of winter settling in across the cryptoverse, the global crypto wallet forecast is anything but chill. Estimates expect that the crypto wallet market will grow by $686.05 million between 2022 and 2026.

Phantom, one of the top Solana-focused wallet apps, recently joined the unicorn club — thanks to closing a $109 million funding round led by Paradigm on a $1.2 billion valuation. That’s a whole lotta VC love.

This milestone is just one of the many reasons we’re thrilled that Brandon Millman, Phantom’s co-founder and CEO, will join us onstage at TC Sessions: Crypto on November 17 in Miami.

We’ll talk with Millman about the rapid growth of consumer wallet startups, a topic he knows well. In the summer of 2021, Phantom had 40,000 active users when it closed a $9 million Series A from Andreessen Horowitz. When the monster unicorn round arrived six months later, the startup had 2.1 million active users and was adding 100,000 users per week.

As of February 2021, there were 82 cryptocurrency wallets with more than 68 million blockchain-wallet users worldwide. We’re curious to hear how Phantom plans to differentiate itself from such a large, competitive field.

Other discussion topics include the status of Phantom’s plan to go multichain, its plan to go mobile, security challenges that wallet providers face, and how these startups can help reduce risk for new users. We’ll also talk about the crypto downturn and how consumer-focused web3 startups can make the most of a market contraction and keep their bottom line healthy.

Prior to launching the startup in April 2021, Millman served as an engineering lead at the Ethereum-focused open protocol 0x. Before joining 0x, he worked at Twitter as a senior engineer. Millman received a BSE in electrical and computer engineering, computer science at Duke University.

Take advantage of our special launch pricing — save $250 on General Admission passes and $200 on Startup Exhibitor Packages while supplies last. Buy your pass or package today, and then join the web3, DeFi and NFT communities at TC Sessions: Crypto on November 17 in Miami.

Is your company interested in sponsoring or exhibiting at TC Sessions: Crypto? Contact our sponsorship sales team by filling out this form.