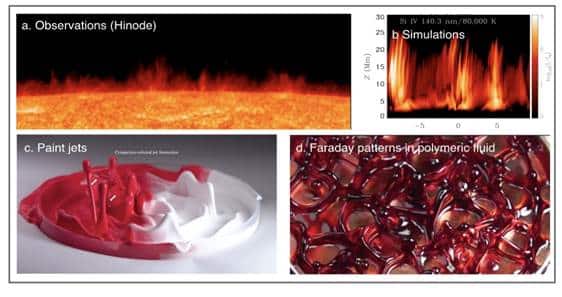 Scientists have unravelled the science behind the jets of plasma – the fourth state of matter consisting of electrically charged particles that occur just about everywhere in the sun’s chromosphere, which is the atmospheric layer just above the Sun’s visible surface.

These jets, or spicules, appear as thin grass-like plasma structures that constantly shoot up from the surface and are then brought down by gravity. The amount of energy and momentum that these spicules can carry is of fundamental interest in solar and plasma astrophysics. The processes by which plasma is supplied to the solar wind, and the solar atmosphere is heated to a million degrees Celsius, still remain a puzzle.

Led by astronomers at the Indian Institute of Astrophysics, an autonomous institute of the Department of Science & Technology (DST), Govt. of India a team of interdisciplinary researchers from India and UK have explained the origin of ‘spicules’ on the Sun, using laboratory experiments as an analogy. They found that the physics underlying paint jets when excited on a speaker is analogous to the solar plasma jets.

In trying to explore the underlying physics of spicule dynamics, the team turned to an an audio speaker. A bass speaker responds to excitation at low frequencies like the rumbling sounds heard in movies. When a liquid is placed above such a speaker and the music is turned on , the free surface of the liquid becomes unstable beyond a particular frequency and starts vibrating. A beautiful example of “Faraday excitation” observed in nature is when droplets of water splashes on the back of a partially submerged male alligator during mating display. However, a fluid like paint or shampoo will result in unbroken jets when excited on a speaker since its long polymer chains give it directionality.

The authors of the article realized that the physics underlying these paint jets must be analogous to the solar plasma jets. They then asked what it would take to generate such jets in plasma? Sahel Dey, from the Indian Institute of Astrophysics (IIA), and the first author of the study explained: “The solar plasma can be imagined as threaded by magnetic field lines, much like the long chains in polymer solutions. This makes both the systems anisotropic, with properties varying with the direction in space.” Mathematically too, there exists an analogy in the treatment of stresses involved, though there are obvious differences as well.

“Spurred by the visual similarity between the solar spicules and the jets of paint on the speaker, we investigated the roles of magnetic field on the Sun using state-of-the-art numerical simulations of the solar plasma. In parallel, we explored the role of polymer chains by using slow motion videography on Faraday waves in polymeric solutions.” elaborated, Murthy O. V. S. N., co-author from the Azim Premji University where the laboratory experiments were conducted. They found that the jets are kept intact against instabilities by the magnetic field in the Sun, and by the polymer chains in the polymeric solution respectively. The research has been published on 3rd March 2022 in the journal ‘Nature Physics’.

The scientists elaborated that the plasma right below the visible solar surface (photosphere) is perpetually in a state of convection, much like boiling water in a vessel heated at the bottom. This is ultimately powered by the nuclear energy released in the hot-dense core. The convection serves almost periodic but strong kicks to the plasma in the solar chromosphere, the shallow semi-transparent layer right above the visible solar disk. The chromosphere is 500 times lighter than the plasma in the photosphere. Therefore, these strong kicks from the bottom, not unlike alligator bellowing, shoot the chromospheric plasma outward at ultrasonic speeds in the form of thin columns or spicules.

Spicules come in all sizes and speeds. The existing consensus in the solar community has been that the physics behind the short spicules is different from that of taller and faster spicules.

The study challenges this widespread belief to show that solar convection can by itself form all kinds of jets – short as well as tall. “The simulations were able to reproduce a forest of jets because they explored a more realistic range of parameters than earlier studies,” summarised Piyali Chatterjee, the corresponding author and lead investigator from IIA. The team members used three different supercomputers, all from India, including a National Supercomputing Mission facility at JNCASR (Bengaluru) to run their massively parallel scientific code.

Professor Annapurni Subramaniam, Director of IIA said, “This novel coming together of solar astronomers and condensed matter experimentalists was able to reveal the underlying cause of the poorly understood solar spicules. The power of unifying physics that connects physically disparate phenomena will prove to be the driving force of much more interdisciplinary collaboration.”

The team from Bengaluru, India includes: Mr. Sahel Dey, a Ph.D student at IIA and IISc, Dr. Piyali Chatterjee from IIA and Dr. Murthy O. V. S. N. from the Azim Premji University. The team from the UK comprises Dr Marianna Korsós from Aberystwyth University and Drs Jiajia Liu and Chris Nelson from the Queen’s University Belfast, and Prof. Robertus Erdelyi from the University of Sheffield, UK.