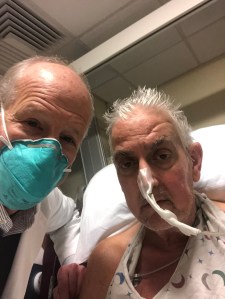 The version used in Maryland came from a pig with 10 gene modifications developed by Revivicor, a subsidiary of United Therapeutics.

Following promising tests of such pig organs in baboons, three US transplant teams launched the first human studies starting in late 2021. Surgeons at New York University and the University of Alabama each attached pig kidneys to brain-dead people, but the University of Maryland went a step further when Griffith stitched a pig heart into Bennett’s chest in early January.

Transferring pig viruses to humans has been a worry—some fear xenotransplantation could set off a pandemic if a virus were to adapt inside a patient’s body and then spread to doctors and nurses. The concern could be serious enough to require lifelong monitoring for patients.

However, the specific type of virus found in Bennett’s donor heart is not believed capable of infecting human cells, says Jay Fishman, a specialist in transplant infections at Massachusetts General Hospital. Fishman thinks there is “no real risk to humans” of its spreading further.

Instead, the problem is that pig cytomegalovirus is linked to reactions that can damage the organ and the patient—with catastrophic results. Two years ago, for instance, German researchers reported that pig hearts transplanted into baboons lasted only a couple of weeks if the virus was present, while organs free from the infection could survive more than half a year.

Those researchers said they found “astonishingly high” virus levels in pig hearts removed from baboons. They think the virus could go haywire not just because the baboons’ immune systems were suppressed with drugs, but also because the pig immune system was no longer there to keep the virus in check. It “seems very likely the same may happen in humans,” they warned at the time.

Joachim Denner of the Institute of Virology at the Free University of Berlin, who led that study, says the solution to the problem is more accurate testing. The US team appears to have tested the pig’s snout for the virus, but often it is lurking deeper in the tissues.

“It’s a latent virus and hard to detect,” says Denner. “But if you test the animal better, it will not happen. The virus can be detected and easily removed from pig populations, but unfortunately they didn’t use a good assay and didn’t detect the virus, and this was the reason. The donor pig was infected, and the virus was transmitted by the transplant.”

Denner says he still thinks the experiment was a “great success.” For instance, the first human-to-human heart transplant, in 1967, lasted only 18 days and, two years later, one in Germany endured just 27 hours.

Denner says that Bennett’s death cannot be blamed on the virus alone. “This patient was very, very, very ill. Do not forget that,” he says. “Maybe the virus contributed, but it was not the sole reason.”

Table Of Contents hide
1 Cause of death?
2 Related

Bennett’s cause of death matters, because if his heart failed as the result of immune rejection, researchers might need to return to the drawing board. Instead, it’s now expected that companies like United Therapeutics and eGenesis, or academics working with them, will launch clinical trials of their pig organs within a year or two.

Bennett was offered a pig heart after Griffith applied to the US Food and Drug Administration for special permission to try an animal organ in a one-off transplant. He was considered a good candidate for the daring attempt because he was nearing death from heart failure and was ineligible for a scarce human heart for transplant owing to a history of disregarding medical advice.