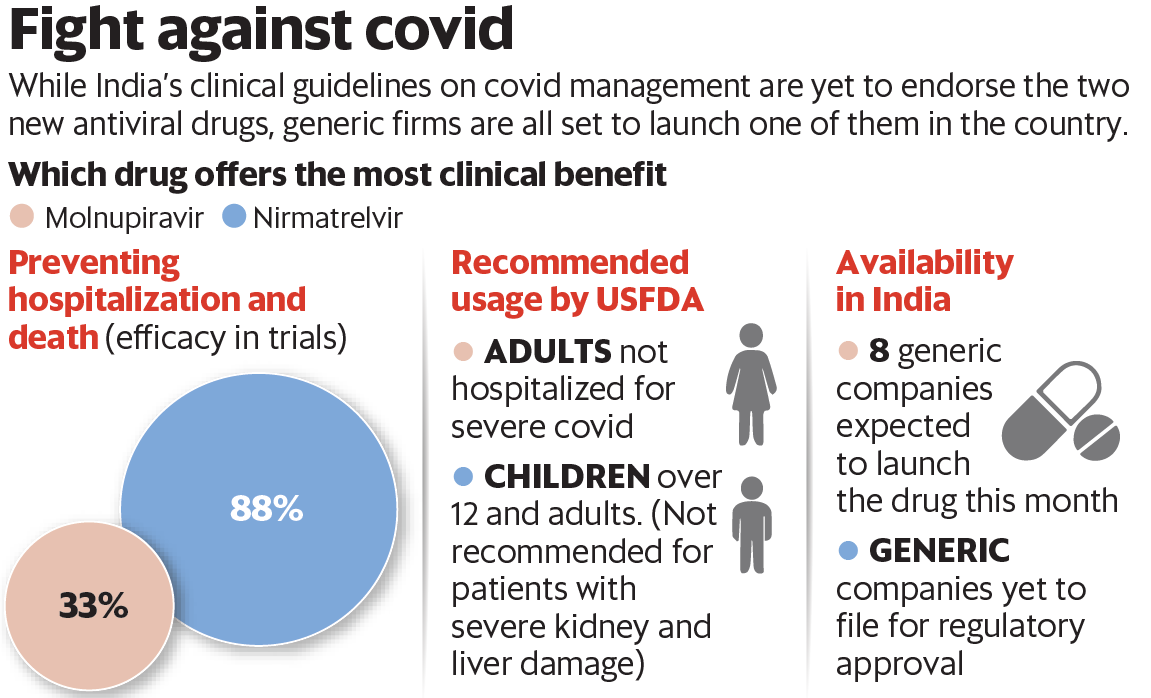 All you need to know about the new Covid pills, arriving in India soon

As Indian hospitals prepare for a likely surge in admissions of covid-19 patients, two new antiviral drugs—Nirmatrelvir and Molnupiravir—will expand the arsenal of tools available to doctors. Mint explains the promise that these new covid-19 therapies hold:

How do the two new covid drugs work?

Nirmatrelvir (brand name Paxlovid) by Pfizer is a combination of two antiviral drugs that can slow the spread of the infection by blocking the virus from replicating. Paxlovid belongs to a class of drugs known as protease inhibitors, which are commonly used to treat HIV/AIDS. It is a five-day treatment course of a total of 30 tablets, with three tablets taken orally twice a day. Molnupiravir by US drugmaker Merck is also an antiviral that introduces “errors” in the SARS-CoV-2 and prevents its replication. Molnupiravir is a five-day course consisting of 40 tablets, with four tablets taken orally every 12 hours.

What is their efficacy in clinical trials?

Nirmatrelvir —when administered within five days of the onset of symptoms—reduced the risk of hospitalization and death by 88% compared to those who did not receive the drug. It became the first oral antiviral to be approved by the USFDA for the treatment of mild and moderate covid-19 patients (including children over the age of 12). In case of Molnupiravir, the reduction in risk of hospitalization/death was 30% in the trials. The USFDA said the drug is likely to be effective only when administered immediately after the onset of symptoms. Molnupiravir is not recommended for children.

What is the price of these two new drugs?

Molnupiravir is priced in the range of ₹900-1,600 for a full treatment course— five-day course of 40 tablets. There is no MRP (maximum retail price) for Nirmatrelvir yet as Pfizer has struck deals with governments across the world for their bulk sale. The US government alone has made an upfront payment of $1 billion for the purchase of the drug.

When will these drugs be available in India?

Eight Indian drug makers are gearing up to launch Molnupiravir in India as part of their voluntary license agreement with the drugmaker Merck. The drug is expected to reach the market by end of January. For Nirmatrelvir, no Indian generic maker has yet signed an official agreement with Pfizer or has announced a clinical trial (a regulatory requirement to launch the drug locally). Doctors who have been following the trial outcomes of these drugs say that Nirmatrelvir is potentially a superior drug than Molnupiravir.

What are the other treatment options?

India’s clinical guidelines on covid-19 management is yet to endorse these two new antiviral drugs. There are no clinically proven drugs to treat mild covid. For the moderately ill, India recommends the use of inhaled budesonide—an asthma drug—if symptoms such as cough or fever persist even five days after the onset of symptoms. The other recommended drugs are Remdesivir, steroids such as methylprednisolone, blood thinners such as Heparin. Tocilizumab is recommended for patients in the ICU.