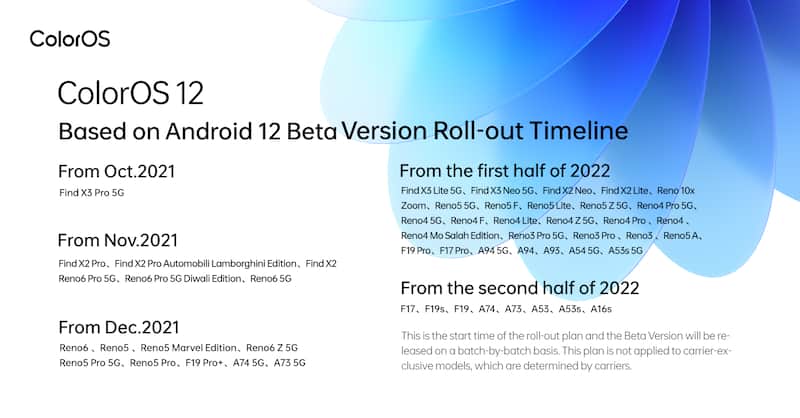 Oppo has officially announced the global roll out plan for its Android 12-based operating system ColorOS 12 on Monday. The smartphone maker had released the China-specific version of the operating system last month. The new operating system will bring a refreshed UI, better performance and privacy options, greater productivity while helping users maintain work-life balance, Oppo said.

Oppo will first roll out the ColorOS 12 public beta in Indonesia, Thailand and Malaysia on the Find X3 Pro 5G starting today. Rollouts will then continue step-by-step in other countries and on additional devices through the rest of 2021 and 2022, the company said.

Oppo says that it intends to offer Color OS 12 on 110 models being used by 150 million users.

Since the Oppo Find X3 5G is not available in India yet, the ColorOS 12 will arrive on Oppo devices in the country starting November this year, beginning with Find X2, Reno6 Pro 5G, Reno6 Pro 5G Diwali Edition and Reno6 5G.

Also Read: Oppo launches A55 in India at starting price of ₹15,490. Check other details

Oppo has built the ColorOS 12 based on its Infinite Design concept, which is lightweight and offers softer icons and animations. Oppo claims this design language is compatible with different languages and can adapt to different phone formats.

The ColorOS 12 emphasises on both comfort and endurance, Oppo states. The long-term code decoupling efforts allow the new OS to minimise lags and stutters over prolonged use, “leading to a low 2.75 per cent system aging rate in 3 years, an average of 30 per cent lower memory occupation and 20 per cent lower battery consumption”.

On privacy improvements, Oppo says that ColorOS 12 brings security and privacy features from Android 12, including Privacy Dashboards, Approximate Location Sharing and Microphone and Camera Indicators. The OS also retains features developed by the OPPO team, such as Private System, Private Safe, App Lock and others.

Opps says that with servers deployed in multiple locations across the world, it guarantees that user data stay in the nearby servers, which is saved in a non-plain text format and is transmitted using a proprietary protocol.

For developers, Oppo ColorOS 12 has inspired the customisable trend in Android 12, like the Wallpaper-based Theming system in Material You, which you would be able to find a similar self-developed feature in previous ColorOS editions. Another fine example of this exchange is the App Cloner from ColorOS that now features in Android 12.