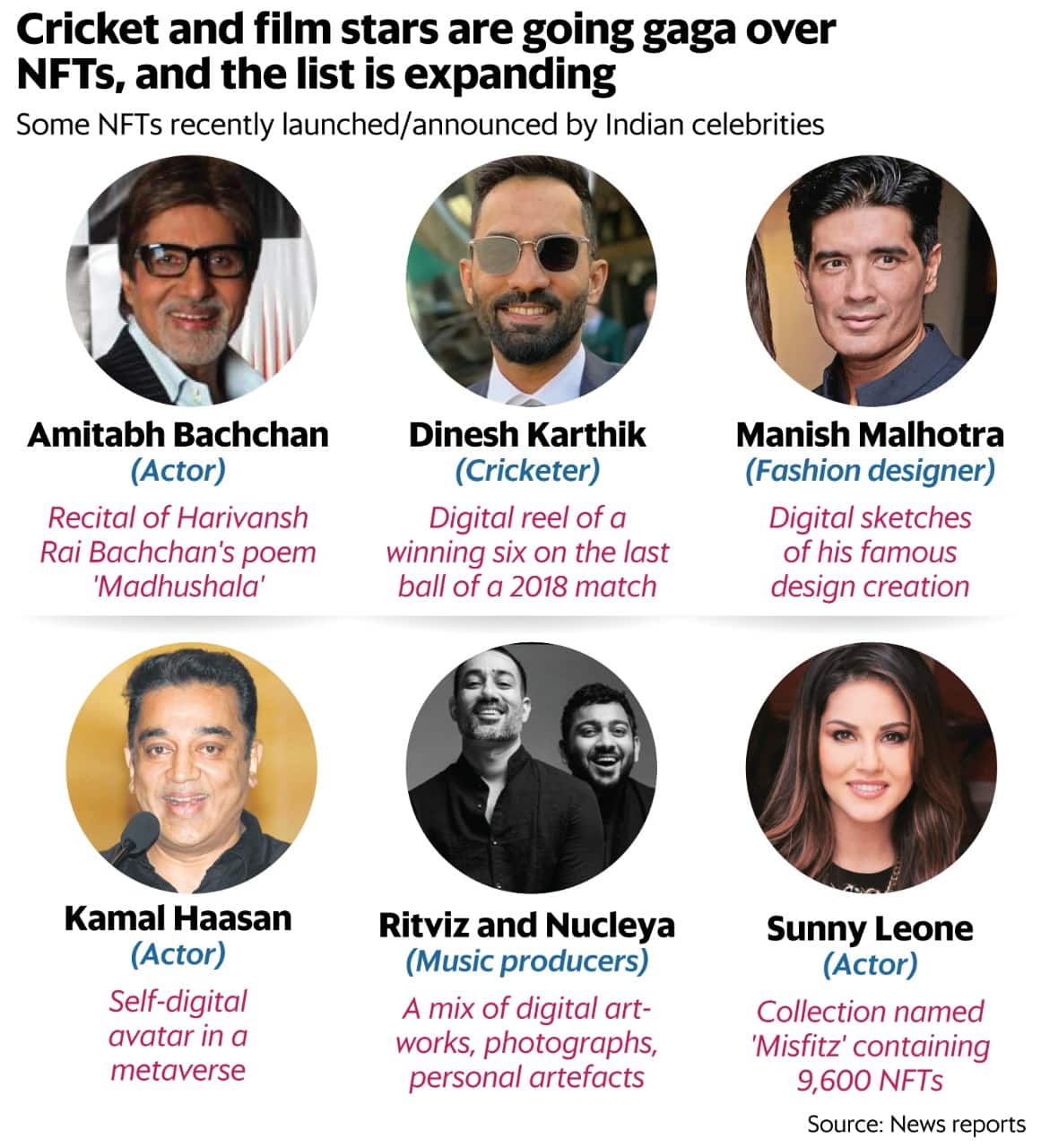 Non-fungible tokens, or NFTs, are the new buzzword in the world of blockchain. Relatively unheard of until last year, global usage surged seven times in 2021, with sales crossing $23 billion, according to market tracker DappRadar. Will the craze stay on in 2022, or are we in for an asset bubble?

NFTs are digital files existing on a blockchain. Anything that exists online—from tweets to video clips, and gifs to musicals—can be traded as NFTs. Buying one doesn’t just give you access to the file, but also the bragging rights of ownership, much like if you bought a painting in real life.

While celebrities, charities and artists can use the burgeoning market to raise funds, critics are perplexed why consumers pay huge sums for files they can access online for free. They also urge caution as more non-tech-savvy individuals join in. “Like in any buyer-beware transaction, it’s important for the buyer to be careful about what they are buying, rather than being over-enthusiastic because the seller is famous,” said Vishal Dhawan, chief executive at Plan Ahead Wealth Advisors. “The use of cryptocurrency to pay [to buy an NFT] is itself risky because cryptos are not regulated yet.”

NFTs have been around since 2014, but the recent exponential growth has been fuelled by our increasingly digital lives and excess market liquidity during covid-19.

The most popular NFT types are collectibles, which represent rare assets that give owners a form of social status. The collectibles segment had a 76% market share in sales in the July-September quarter, said NFT database Nonfungible.com.

Digital art was next, with a 9% share. Artists are lining up to explore avenues to exhibit their work and earn. NFTs also provide them a way to earn royalties every time their creations change hands. In March, an Indian crypto trader known as Metakovan paid $69 million for a digital collage created by an artist called Beeple.

But many in the art world are divided. Some claim this is a new way to make good money, while others argue NFTs are not a good long-term investment because these are not physical copies.

However, blockchain technology is increasingly staring at regulatory controls. While talking about a proposed law to regulate cryptocurrencies last month, Finance Minister Nirmala Sitharaman said controls on NFTs would also be considered. Online search interest in NFTs among Indian users has risen since then and reached all-time highs.

Industry experts largely feel any regulation would only offer clarity to the nascent market by establishing a legal framework for digital assets, including legal status, classifications, and taxation.

Due to the lack of regulations, NFT traders may in fact want to “let this space develop and get regulated, and then start participating rather than join the current frenzy”, Dhawan said.

Vishakha Singh, a vice president at India’s first NFT marketplace WazirX, said regulations would be good for NFTs because “only the true blockchain users will get on the bandwagon then”. It won’t affect sales much, as NFT participants are innovators and tech-savvy people who understand the underlying technology and its related challenges”, she said.

But moving into 2022, legal uncertainty isn’t the only challenge. A bigger risk for NFTs comes from within, as all young booming markets face: a hole in an asset bubble.

One red flag is collectors willing to spend six- to eight-figure sums for digital works they can view for free, too. A Nonfungible.com report noted that the market had turned more speculative and volatile than ever, and several resales were already being made at losses—a sign of imminent deflation.

High prices could indicate “very significant excesses—probably more than they should be”, said Dhawan, urging buyers to be careful about buying into “a fairly untested asset class”.

The surplus money as a result of the pandemic is a key reason behind the craze. Dhawan called for caution as central banks are set to start absorbing the excess liquidity come 2022. A collapse could hurt vulnerable artists and collectors much more than venture capitalists in this market.